My father is a big, big James Bond fan. So when my mother and I went on our trip to Istanbul in 2012, he insisted that we visit the Cistern. Because James Bond was there.

The entrance to the Basilica Cistern is quite inconspicuous, located diagonally opposite the Hagia Sophia on Sultanahmet Square. The Cistern is one of the many underground cisterns in Istanbul. But unlike the others, it is open to the public, and obviously James Bond.

We went there on a rainy afternoon, hardly anybody else was in there. It was eerily serene and the symmetrically lined marble pillars that stretched on for a distance made the Cistern look like a place waiting to be discovered.

There isn’t much to be discovered though it is nice to walk through Cistern, its dim lights providing just enough visibility. At the end, you’ll find Medusa’s head supporting the bottom of two columns – one sideways and one upside down. 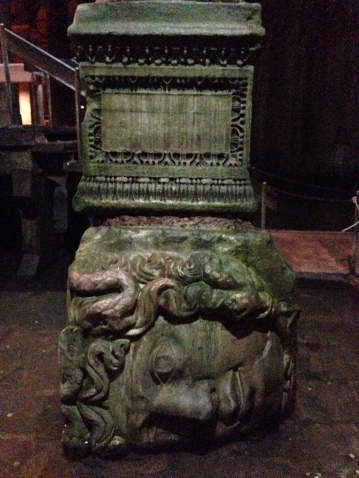 Fun fact: I have never watched a single James Bond movie in my life. Not even the one where he apparently runs through the Basilica Cistern.

6 thoughts on “The Basilica Cistern in Istanbul”