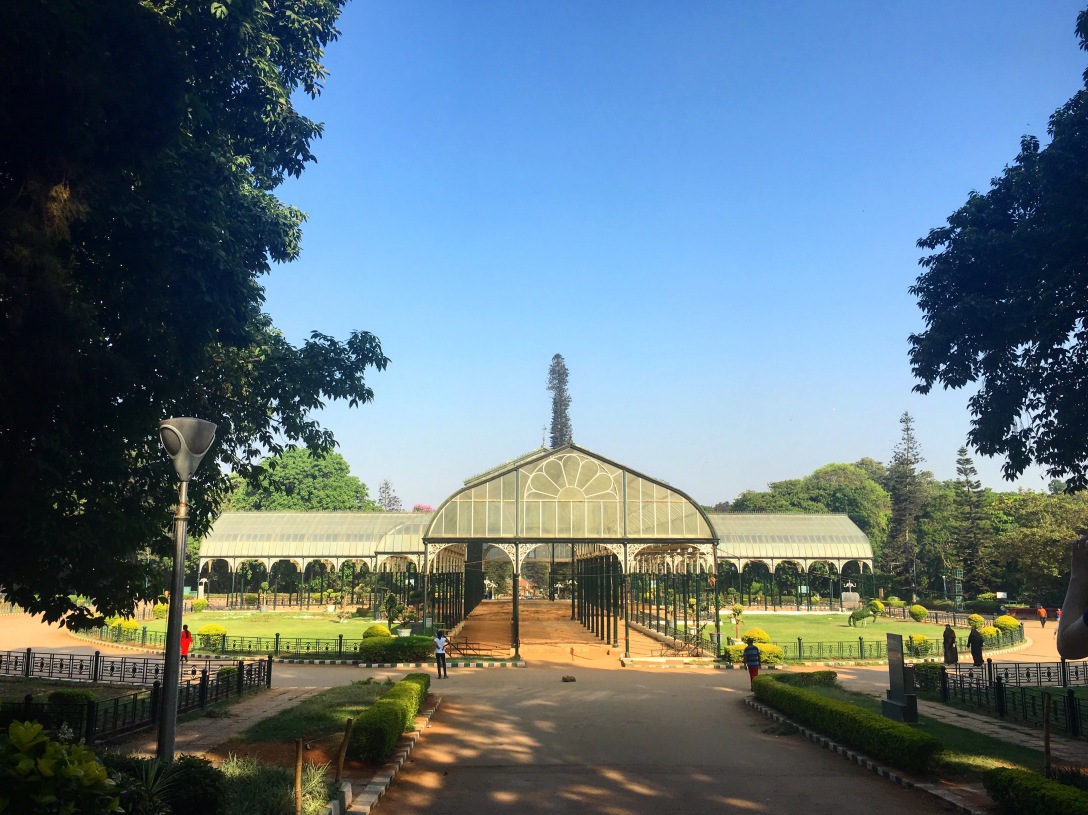 After putting it off for more than two weeks (shout-out to all the lazy bloggers!), I’m finally back with the second part of my post on the Lalbagh walking tour. So without any preamble, I’m going to dive right in.

Our walk started at five minutes to 7 AM, when Vijay showed up at the big rock wearing a hat and holding a cane, just like he said he would be.

Before we ventured into the Garden, Vijay took us to the side of the rock to show us a stone plaque on which a warrior was carved and a nandi, (meaning bull), the animal that serves the Lord Shiva in Hindu mythology. There are at least 10 nandis in Lalbagh, Vijay said. 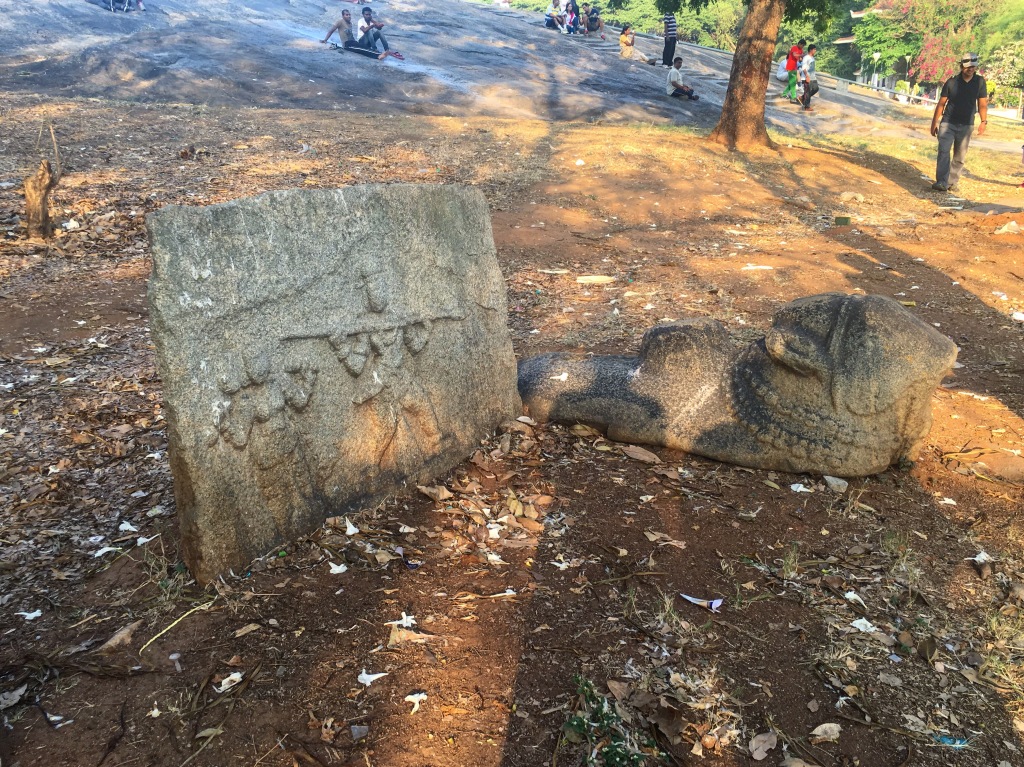 Apparently, stones like this are put up where battles take place, to commemorate the valor of a hero. I’m not sure if Lalbagh was ever a battleground (and now I’m wondering why I didn’t ask).

This one dates back to possibly 1400 AD. However, Vijay said that the date of a sculpture is usually never given in India, as an act of sanctity.

One of the first trees that Vijay pointed out to us was a tamarind tree. These are not foreign to me at all but I learnt that the word tamarind is derived from the word tamar-e-hind, which is Arabic for Indian date. The name was given by Arabian traders when they found the plant growing in India. It eventually diluted down to ‘tamarind’. I love learning why things are called what they are.

One of Lalbagh’s landmark structures is the Glass House. 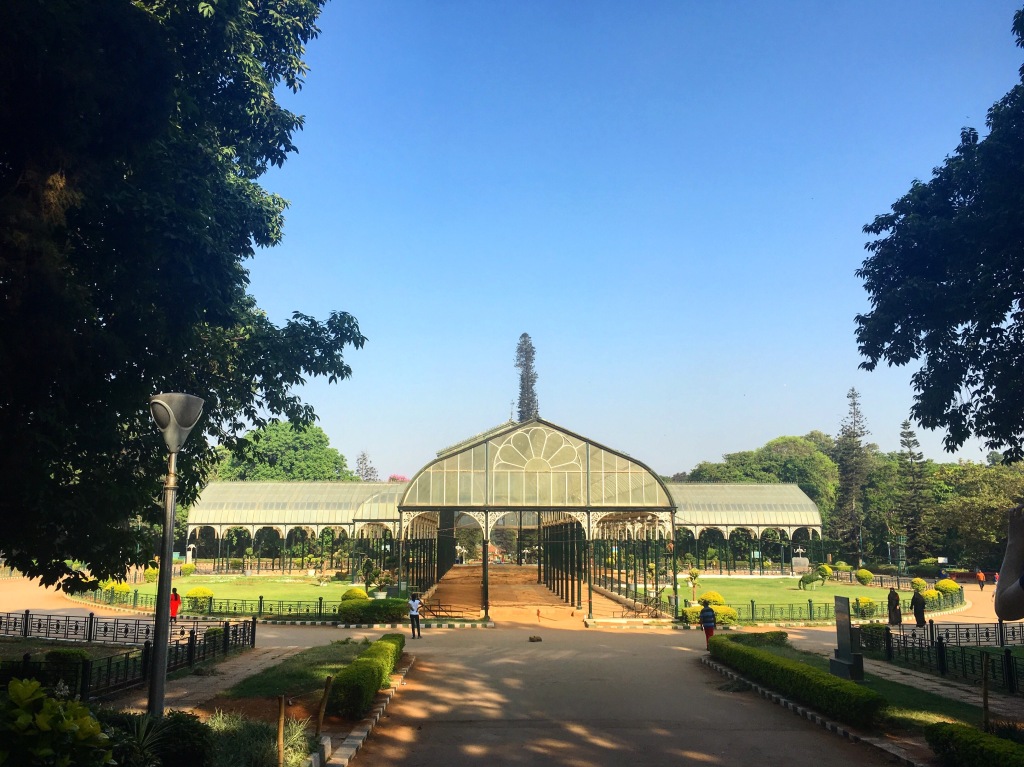 The design of the Glass House is inspired by London’s Crystal Palace and while it’s quiet and empty now, the Glass House comes to life during the famous flower show that takes place twice every year in Lalbagh, making it a must-see for anybody in Bangalore at the time.

Then I saw some puppies. 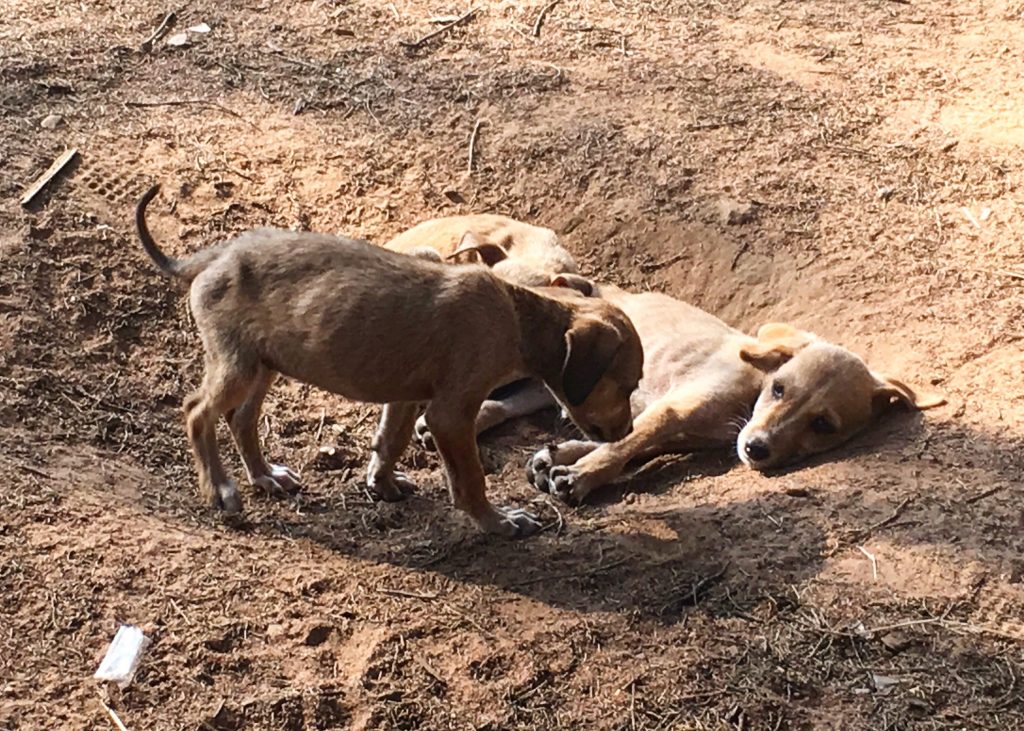 These babies were lazing around in the shade of some Juniper trees. How badly I wanted to kidnap one but I successfully resisted temptation (imagining my father’s furious face helped) and all I took was a photograph. If you’ve read this, you know about my weakness/love for dogs.

Moving on… We approached this majestic looking fig tree. 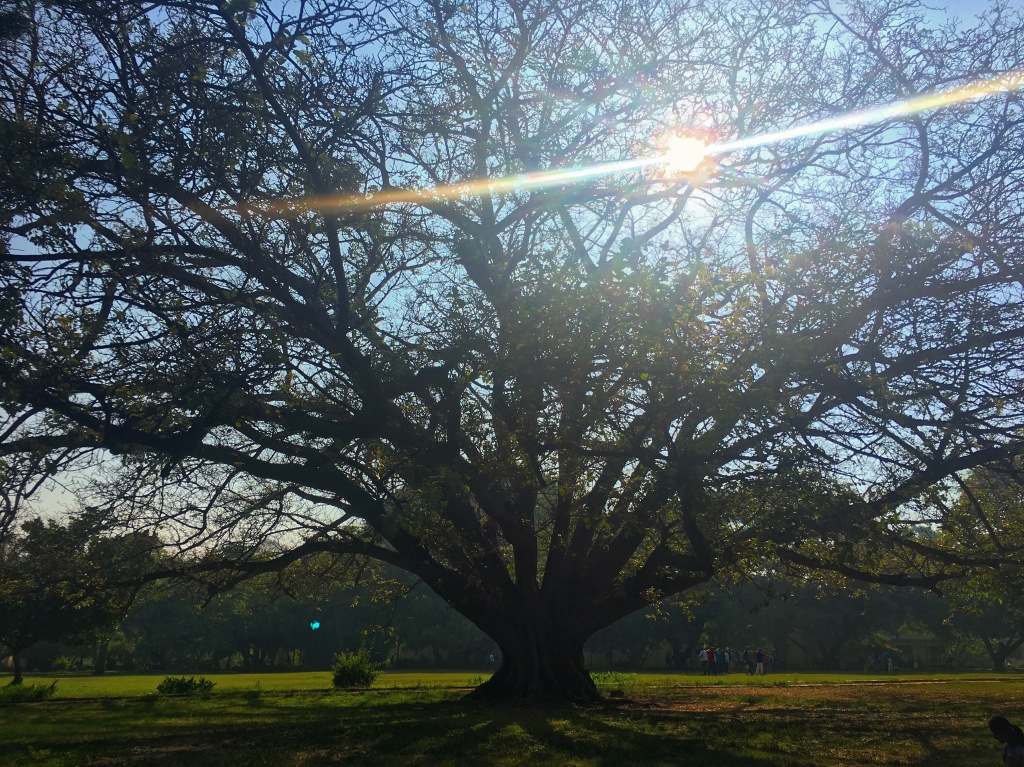 Interesting fact: There are 115 varieties of fig trees in India, but the fig that this particular type of tree produces is where wasps choose to lay their eggs. When they hatch, they instinctively fly out of it.

Vijay even picked up a few fallen figs and cut them open with a pocket knife with the hope that we might be able see some of the eggs. But we weren’t that lucky. He said on several occasions when he cut open a fig, there would be the slightest movement indicating the presence of wasp eggs.

After we walked past a small garden of magnolias – there are about 10 different varieties of magnolia growing in Lalbagh alone – we met this tree.

This is the Terminalia Arjun (Arjun or Arjuna tree in English), a tree known for its medicinal properties. The bark of this tree, once brewed, can be consumed like tea and it is said to be able to cure irregular heartbeats.

It might be hard to believe and Vijay said he felt that way too, until a walker on one of his tours said his father had been cured of an irregularly beating heart by consuming the brewed bark of the Terminalia Arjuna!

Maybe it was a one-off miracle but I thought it was amazing how a tree that has so much value was just standing there unassumingly, perfectly accessible in the middle of a public botanical garden.

Next stop: Palm trees. Lalbagh is also home to quite a few palm trees. This particular species of the tree flowers once in a lifetime, after which… it dies. But what’s really interesting about these trees are that its leaves are responsible for the curvy scripts of southeast Asian languages.

They were used as paper to write on but because of their texture, which has ingrained lines, it was difficult to draw or write anything that involved a straight line. Doing this would cause the palm leaf to tear. So when the scripts of southeast Asian languages were being developed on the palm leaf, they had to be curvy and curly.

Check out the Kannada script in the sign board below.

Spelling errors are so common in Lalbagh, it’s hilarious. We even saw a tree from Swaziland that was credited to Switzerland. So while you’re walking, listening to Vijay’s fascinating stories, learning about the history and plant life of Lalbagh and occasionally spotting a bird or two, a funny sign will come by and surprise you.

9.45 AM and my stomach was beginning to rumble. All I could think about then were the buttery dosas and fluffy idlis that awaited us in MTR. Fortunately, the walk was coming to an end.

MTR is just a stone’s throw away from Lalbagh’s main gate. Vijay had a table reserved for us and he ordered small portions of all the main breakfast dishes so we didn’t have to miss out on anything. There was masala dosa (dosa with a spicy potato and onion filling), plain dosa and rava (semolina) idli. We even had dessert, which was badam (almond) halwa and the softest Gulab Jamun I’ve ever eaten. The day ended with filter coffee, which was served in silver tumblers.

One walk through Lalbagh is certainly not enough to learn about everything it has to offer. Whether it’s on a tour or not, Lalbagh demands more than one visit to appreciate it. I know I’m going back, especially since that Gulab Jamun will be waiting for me at the end.

A few details about the walking tour: As I’ve mentioned before, it’s conducted by one of the oldest (or probably the oldest) walking tour companies in Bangalore – Bangalore WALKS. The Lalbagh walking tour is held almost every weekend, from 7 AM to 10 AM. It ends with an optional breakfast at Mavalli Tiffin Room (MTR) – one of Bangalore’s oldest and landmark restaurants. The walk costs INR 500 and if you choose to join the walkers for breakfast (highly recommended), it’s an additional INR 220. To register for the walk, you can visit the Bangalore WALKS website.

Here’s where you should go if you need to know more about breakfast at MTR.

P.S. This is not a promotional post. But I am certainly a big fan of Vijay Thiruvady.

3 thoughts on “A walk through the Lalbagh Botanical Garden: Part 2”